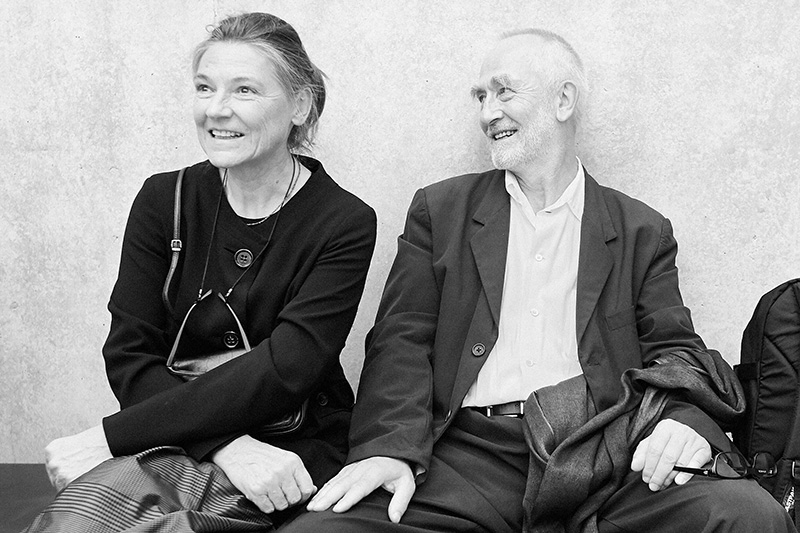 Annalisa had always dreamed of living in a house built of wood. Whenever she talked to me about it, I had the impression of a cosy home in the mountains where she would live alone. The two of us as a couple or a family with children never came up in all the different versions that she described during the many years that we lived together. It was obvious that she was describing a very personal feeling of home and hominess. She envisioned rooms out of wood and painted in various colours. Was she talking about the way Swiss mountain pine smells, about a crackling fire in the living room stove, about the special warmth of wood as a shell for the human body, the way she did recently? I don't recall exactly what she said but I still have the impression that there was something special emanating from the house that she described, something that applies only to houses made of solid timber, and not out of slats and boards and not out of plywood or veneers.

And now the house has been built. Light and bright, in the hamlet of Leis at an altitude of 1500 m and with age- blackened wooden buildings. We put up another new building next to it at the same time, a smaller sibling, two houses from the same family, the Leis houses. Last year all summer long, it seems to me, you could hear the carpenters hammering, sometimes in concert with the sound of farm machinery, the tinkling bells of goats grazing further up the slope and the bright sound of the church bells chiming in the bellcote of the lime-white St. Jacob’s Chapel nearby. Legs wide apart, faces intent with concentration, but breaking into a smile if one caught their eye, the young men stood on the walls, hammering down the beams with their sledgehammers, usually working in pairs to a rhythmical beat. Swinging their hammers overhead, they slammed down the beams until the double tongue was flush in the double groove of the beam below, the beams tightly placed and assembled to form a wall.
Smoothly planed solid timbers, 11 cm wide, 20 cm high and up to 6.60 cm long, were stacked on top of each other, layer upon layer, forming walls three storeys high, the corners connected using the ancient and elegant dovetail joint or, if the interior layout was such that the corners had to be flush, with the classical finger joints used to make corners.

Wall beams, ceiling beams, roof beams, window frames of wood, connectors of metal, steel dowels, special extra long screws, wall ties, slotted plates, tension cables -- these components all arrived pre-processed at the construction site; the solid timbers, precision cut to size, were tied together and plastic wrapped in large bundles for transport to ensure that, until use, the oven-dried timber retained the proper humidity as defined by the engineers: fourteen percent for the inside walls and seventeen percent for the façades. Every hole, every mortise, every tenon, every notch, dovetail or ledge was already in the right beam in the right place. Some 5000 beams for the two houses, hardly any two alike. Constructing meant assembling.

Before arriving at the construction site, the beams are milled in a fully automated joinery machine in the workshop of the timber construction company. Standing behind glass, we watch the fluid, staccato work of the machine. Having already been planed on four sides and milled with double tongue and double groove in another machine, the timber is precisely tracked with powerful pressure rollers for processing from left to right through the approximately man-sized metal cabin of the automated machine. Saws, drill bits and routers rise and fall, move forwards and backwards. The tools are sharp. The precision is great.
In order to cut the wood to size in the workshop before transporting it to the construction site and building the houses, the timber company’s engineer wrote digital instructions for the computerized machine, using the data from the construction plans that our architects had generated on the computer after the design phase had been completed.

Our Leis houses have big windows. They extend from wall to wall and from floor to ceiling. They frame the landscape and welcome its images inside the house.
The traditional construction of log cabins, consisting of four walls that form a boxlike unit, does not permit large windows, as making large holes in the walls of the boxes would undercut their stability.

The plan of the Leis houses shows a number of small, traditionally constructed boxes in different sizes and shapes for the utility rooms, the stairs, the pantries, bathrooms, toilets and baths. These small rooms are freestanding units in the ground plan and are horizontally linked by the ceilings of the storeys. Hence, the ceilings and utility rooms form the load-bearing structure of the buildings. The glazed spaces between the utility rooms create large panorama windows. The side walls of two utility rooms standing opposite reach out towards the view and, along with the floors and ceilings of laminated timber in between, they form wide bay windows to live in.

In the course of working on the Leis houses, we managed to wrest quite a bit from the principles of the traditionally constructed wooden box. To begin with, we converted the wooden box -- the main living room in the Alpine farmhouses in our area -- into a smaller utility room. Then we placed these rooms in the ground plan as pillars, layered above each other in section and interconnected from storey to storey with wide laminated ceiling panels. The exposed ends of the walls are held together, where necessary, with steel pins or cables.

In this way, the two buildings are spacious and filled with light; the design also allowed for an expansive layout of rooms that open and close. Walking through the house means moving from view to view. The presence of the solid timber is tangible everywhere, intimate and close to the body; gentle, silky and shiny, it radiates in the light.

The houses are now slowly drying out and the wood is shrinking. The storeys will lose a little bit of height in the next few years: about two or three centimetres. But our windows, doors and stairs, the pipes for the plumbing and the built-in closets, all fixed in place as they should be, are prepared for the wood that contains them to continue moving.